With Neil Lennon describing Celtic’s title win as “Breathtaking”, let’s take a look at some other things that might be described by the same word.

Celtic celebrate in the changing rooms after clinching their 45th league title. Felix Baumgartner prepares to jump from very edge of space.

A worldwide audience of millions watched live as Felix Baumgartner jumped from the very edge of space. At an altitude of 39km and reaching speeds of 1,357kph this could certainly be described as breathtaking! What do you reckon Neil? 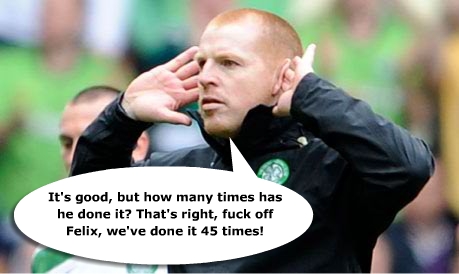 Fair enough Neil… Well how about this?

The mighty Grand Canyon, Arizona. 227 miles long, 18 miles wide, you can see it from space! Everyone who sees it says it’s breathtaking! You havin this Neil?

Neil is not impressed.

To be fair though, you’re playing against shit teams. The only guys that could’ve given you a run for your money aren’t even in your division anymore? Not really a contest is it? Anyway… I’ve got one more for you Neil.

Now come on Neil. Planet Earth as seen from Space. You must admit, this IS Breathtaking! 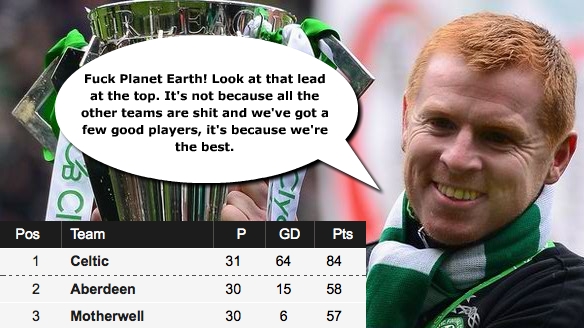 Lennon and the League Table

You’re right Neil. The accomplishment of Celtic truly is breathtaking! The odds were completely stacked against you this season yet you managed to pull it out the bag, over coming some difficult opposition. What a team effort it’s been to win one of the toughest (if not THE toughtest!) leagues in Europe. Aberdeen and Motherwell had the title on a plate and they fucked it up! It’s nice to see the underdog winning a trophy. Well done Neil and well done Celtic! Truly breathtaking!